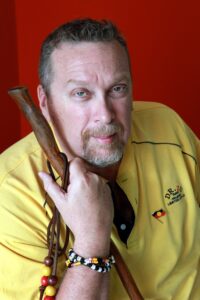 Uncle Paul Calcott is a Wiradjuri man who contracted polio as an infant. Paul been involved in the disability sector most of his life, firstly as a participant , leading to a career of almost  40 years with the last 15 years specifically in the area of First Peoples living with disability .

Through his role as training and resource development manager with the First Peoples Disability Network,  Paul has travelled extensively throughout Australia , visiting First Peoples’ communities in regional rural and remotes areas of Australia gaining first hand knowledge around how disability is managed in those places.

Paul is a recognised Elder in his community sitting on Local Courts justice groups and advisory boards around the Arts and disability .

Paul facilitates an Art Group for First Peoples living with disability and facilitated numerous successful art exhibitions, including the Culture is Inclusion exhibition held at the United Nations in Geneva last year.

Paul has artwork in both international and national collections, including Canadian and New Zealand Ministers, The Australian embassy in Switzerland and the Queensland Treasury department.